Message Sent
Thank you for your inquiry. We will respond to you as soon as possible.

Create a lasting legacy with your gift

Meet your personal financial goals while making a difference for our future.

You are at: Planned Giving > Gift Options > Donor Stories

Remembering King's College In Your Will Is Easy 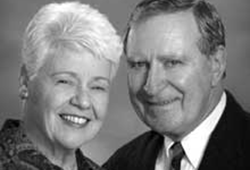 Neither Bill Runner nor his wife, Joanne, are King's College graduates, but that has not stopped the couple from supporting the College with time and money for more than 30 years. They strongly encourage others to do the same. "It is an excellent school with a very good reputation," says Joanne, who, like Bill, believes in the importance of a quality education. "They're doing a wonderful job."

King's has been part of the couple's life since the 1970s when Bill, a stockbroker at the time, was handling investments for the College. Later, as an investment banker, he worked with King's on several bond financings.

"I felt sort of guilty that I was making money from the College but wasn't giving back," Bill says. Once he made his feelings known to Father Lane Kilburn, Bill was named to the Executive Committee of the Century Club and has served King's ever since. Bill will assume the duties of chair of the Executive Committee of the Century Club as of this spring.

While Joanne was actively volunteering for other community organizations, Bill committed himself to raising scholarship money for students in need through the Century Club and the College's annual Farber Memorial Golf Tournament, now in its 24th year. He chaired the tournament for two years as well. "A lot of these students really need that extra $1,000," Bill says.

The Runners make annual gifts to King's, and they are also remembering the College with a bequest in their will. "Planned giving is so important," Bill says, adding that, unfortunately, a lot of people never get around to remembering King's in their will or estate plan, regardless of how much the College has meant to their lives. "If you went to King's there has to be somebody that had a positive impact on your life," he says. "I would like people to sit down and think what King's has meant to them, and then put that one line in their will or trust to remember King's College. It is so easy to do."

For information on making a planned gift or establishing a scholarship, please contact Lisa Shafer at 5702085882 or lisashafer@kings.edu.

Copyright © King's College, All rights reserved.
The information on this website is not intended as legal or tax advice. For legal or tax advice, please consult an attorney. Figures cited in examples are for hypothetical purposes only and are subject to change. References to estate and income taxes apply to federal taxes only. State income/estate taxes or state law may impact your results.

Let us help you with your gift plans