Message Sent
Thank you for your inquiry. We will respond to you as soon as possible.

Create a lasting legacy with your gift

Meet your personal financial goals while making a difference for our future.

You are at: Planned Giving > Gift Options > Donor Stories 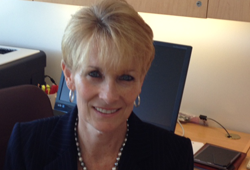 Barbara Landmann '78 credits her mother, Patricia, as the guiding force that led her to King's. "When we were on our campus tour, my mother saw the Chapel and told me, very emphatically, 'you're going to King's.' I often say that it's the best decision I never made."

After obtaining her degree from King's, Barbara has embarked on a long and successful business career, starting with Bell Labs and eventually with subsidiaries of AT&T and merger partners of Lucent Technologies. Currently she is senior vice president for Field Force Operations for North America, the Caribbean, and Latin America for Alcatel-Lucent S.A., based in Murray Hill, New Jersey.

Barbara recently established a scholarship in memory of her mother and directed that the scholarship be awarded to students who overcome personal challenges to attend King's. Her motivation for the designation springs from her own volunteer interests working in support of visually and hearing impaired persons and disabled US veterans.

"I'm grateful to King's for three reasons. First, most of my dearest friends are people I met at King's or are colleagues I work with who also happen to be King's graduates. Secondly, my experience at King's was very influential in the development of my adult faith formation, an important part of who I am today. Lastly, the excellent education I received has resulted in a long, interesting and diverse career. King's was the foundation for all this."

Barbara has also included King's College in her estate plans. In appreciation for the influence her time at King's played in her current faith and call to service, Barbara has chosen Campus Ministry as the direct beneficiary of her estate gift.

Let us help you with your gift plans